(Note this is being provided unedited so as to preserve the fullness of spirit of the Tweedle who wrote it.)

I figure that leaky mind of a tweedle, twerked out on twerking and being lost in the urban jungle whilst soliciting locals with naught but 1. a barely b-cup 2. Table it and Tri Anything, I must have SOME unique perspective to lend. This Tweedle humbly submits a re-hash in the hopes of providing another piece of the cold pizza puzzle which constitutes The Real Story. #willTheRealKickyDadyPleaseStandUp

It all began, as every cross-dressing jaunt should, with a man, a dress, and his awesome grandmother. Down the catwalk of the Westcott neighborhood struts Just Michael, clad in a tastefully cut jib, (to be fair, his salvo just-peeking above the knee “come-hither” dress). We zoom to the Penny, after much ado about how pretty we all look as well as a great deal about Judd Apatow (but that is neither here, there, nor on-on-on-on trail [And this is BEFORE beer goggles]).

Arriving in style, we find the pub transformed, and it’s occupants transfigured by naught else but panache, glitz, glamour, and very scant smell of the smokey aftermath of waxed masculinity. Like any excellent racist event, there is swag at the sign-in where Goldie and UC hold court to sign muscle-bound-beauties in, from Vagiant in his moo moo and kilted patterns, to Just Vaginas (known erroneously to the hash at large as “Dr. Cock Or Two”) slim-fit svelte dress.

After make up, lipstick, Ke$ha-worthy sparkles, and nail polish, provided and applied by Six From Behind and co., we surveyed the beautiful bounty of baskets shamelessly promoted by Buschy Cholera, with encouragements such as “Give me money or I’ll speak to your children.” The glorious menagerie of raffle baskets (TY and HT to FakeyAndCo!!) included an International basket, with snacks and cascades of nifty global giftees, an adultworld basket with various wonders for the pleasure of the winner (unless you’re UC, in which case the sex toys go back in the closet next to the other white elephant gifts). Then it’s time to….DRRRRRRRRRRRRRRRUM RRRRRRRRRROOOLLLLLL:

Circle up!!!! After we were gawped at by passers-by, and our photos taken by sidewalk-confined muggles, our gaggle-troupe-harrier-folk went around circle for intros. A few out-of-towners showed from the Hudson Valley, Ithaca, and Flour City [others??? I was busy making bank for Clear Path Help 😛 Help a leaky Tweedle Me brain out] [Mars-Interstellar-Hash]

Ok this is getting extraordinarily long. #drinkItDownDown SO: Abstract/Summary/Short Version: Running. Drinking. The trail was a 6-ish miler…Everyone looked beautiful. No one got hurt. All the Roses were Red, Weddings were Quainter, You should not photo-bomb, unless you’re a Wanka…;) hehe

[oops, ok, /end short version]…because of that 3-hour-detour indulged by Tri Anything, all the nudity Table-it could muster, and me, poor Tweedle You, listlessly parkouring everywhere that lent itself to my highly-focused ramblings!!!

Exhibit A: Not moments away from the MOST and circle, we photo bomb a wedding (the first, yet not the last, on trail). (n=wankas^269) 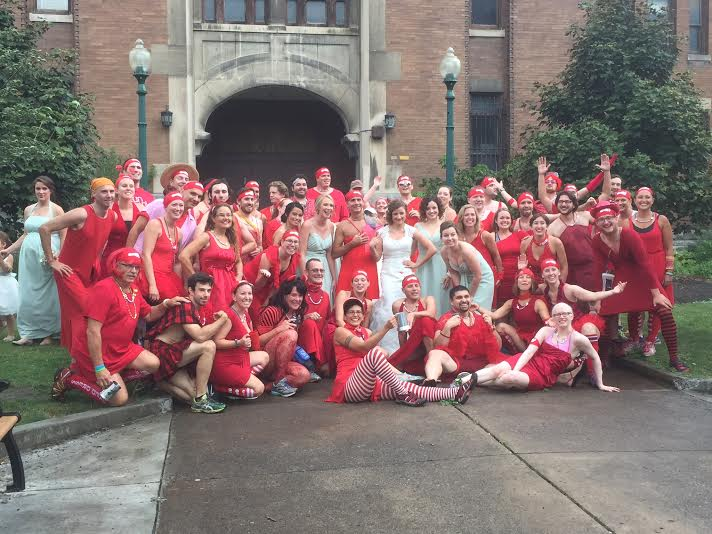 Buschy gets punished for porting tech on trail. There is not enough basmati amongst our handful of half-minds, so the Choleric Buschman must mobilize what’s left of his dandruff to fashion an absorbent heap in a vain effort to revive the bitter and broken remains of what was once his GameBoy color.* (Sorry for pushing you in the font of funk, buschy).

Then…..there was flour. There were, apparently, stripper poles too. Which this Tweedle missed because she was either helping the less fortunate or the opiates have finally boggled the lobe that controls memory/risk-aversion BECAUSE: Once upon a sidewalk by J Ryans, I sprinted past in gleeful array of red frippery, sparkly boa a-bouncin and what do I spy with my little eye but an intriguing flash of red and the bark of raucous, yet mildly British, laughter. I skid to stop, as if a Tweedle-Road Runner #notdialup and what to my wondering eyes and thirsty gullet should appear but a modiCUM encircling Tri Anything in her Red Finery and 2 British gentry with BEER!! Watching their Sunday “futball,” they were “best enemies” who Just Bobbie had stopped in to have a pint with! I careened through her circle of admiring riff raff where they promptly offered to buy me a 90 min, IF I’d support Liverpool (“No! Manchesta’, ya bloomin’ iddjiit!! Man U!!”). (Arsenal fan, dyed in the UK-lamb wool, right here #wotWot?) Table it, makes a extravagant and noblesse appearance, flaunting his earning thus far in florally fans of ca$h from his bosom. 2 veterans donate a $20. #awwYEAH

Then the three lost and drunk RDR-ers get involved in engagement photos, and ANOTHER wedding, markedly less pleased to see us, this time around. Table it solicits everyone he come across, and makes a good impression and $30, shamelessly approaching anyone and explaining our cause, collecting money, maybe sporting a little public nudity, and running away.

We 3 are thoroughly lost, it is raining, and down by the Irish fest, then by Destiny mall, where we follow a pipeline and lose dolla dolla bills y’all.
Tri anything asks a dude: “Have you seen any red dresses run by here?” who is shocked and scared of us, and he says, resolutely: “No.”
I ask: “Have you seen anyone in a red dress run by here?”
He answers, again, resolutely: “NO.”
Table says: “Were there peiople running by in red dresses?”
The dude says: :Oh, yeah, they ran by, that way.”

We find the group! We sketch a naughty chalk outline of Snidley with an appendage. I offered to do the same to TOFU, but he declines and gives me a Craft beer mag about PUMPKIN BEER (YOU ROCK TOF!!) after downing some well-earned Duke. 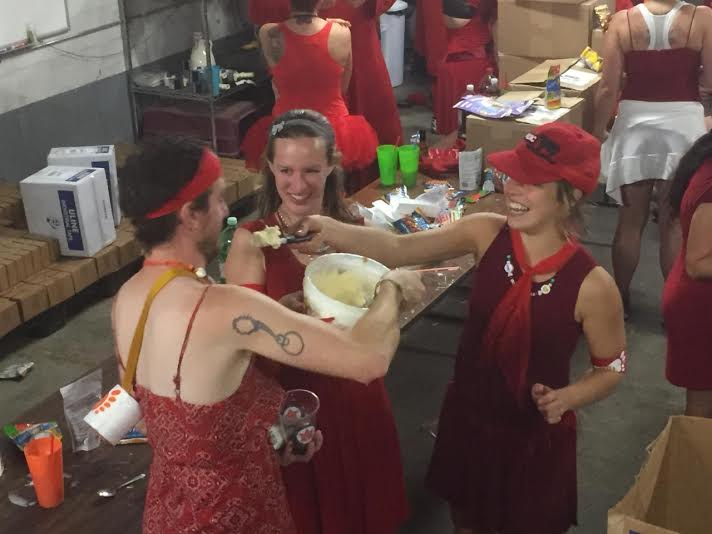 There’s a playground check. And Clear Path for Veterans looks like it’s money bags will be well-lined. !!

We chuck a football around–after a raging warehouse dance party–then ON IN! ON IN ON IN!! Thenwarm beer and cold pizza and raffling and mismanagement did a BANG UP job of keeping people in line. Circle!

Just Cristianna is named–finalmente!!– Many names are tossed around: Spankakopita, hot Sauce, Sriacha Crotcha, Vats Tracks of Land. Many questions were posed:Where do you work? Whose calves would you lick, given the chance? If you had to f*ck a turtle, what would his name be? (HT/ST the unfailingly tasteful and oft-in-pursuit of the homeless Hot Busch for the final inquiry). Hair was spiked with flour and packed into ears and named: “The Trojan Whorse.” (note: the TOFU instantiated modification of nomenclature. I have it on good authority that the latin (genus and species of said trojan horse) is hot sauce. (the reader is asked: Question not a Tweedle’s etymology or her choice in men/women/cutedogs).

Later, Turtle dick sets an impromptu and arduous trail of cheetos at 9:30pm out the back door of the Penny through the front door again. hehe.

Until the next cross dressery, wankas!
xoxoxox Tweedle Me OUT!

Notes
*buschy: it is will deep regret that you were tackled by a loose canon. The armory square cannons are often mistaken, much like the Fogo Caldera and Jackoff’s bowels, still active and largely explosive. I sincerely hope your gameboy color survived.