What’s that ? You’ve got a fever and the only cure is an OTD rehash ?! If so… you are delirious, seriously, go seek medical attention.

13 plus Fakey 2/3 of way through trail showed up on a beautiful Saturday for Pirates and Pumpkins, and moar bees everywhere. Not to be confused with Pilates and Blumpkins and herpes everywhere, which I’m guessing was Ithaca trail Sunday (cause Peeg and others teach fitness and Dunga and …. f*ck it neermind it wasn’t that clever to begin with).

Two justs Megan and Mike plus birthday Chunks hared some possibly virgin territory on trails and uphilly roads using many way too long falses. To justify uphilly nonsense the justs provided grog and taught a sea shanty at a shot check near a woodland homelessville. Good job justs!

The pack went on-in, where pre closing circle some allegedly straight males discussed their type if they were gay but they aren’t but if they were …

And one of their type was an otter…
https://www.urbandictionary.com/define.php?term=otter

Then we almost drowned Chunks. Again.

Then we killed our Just hares Just Megan and Just Mike who were reborn as Imgoodgetonmenow and Ichiball (sp?) after being baptized in flour.

Then we on after drank at the Pale and Bucket. Which may be called that as their food made several turn pale and possibly require a bucket. On the plus side, metric tons of tater tots for all the hashers.

Pics or it didn’t happen ? See below.

On – make rehashes great, or at least happen, again – on
-OTD [One Trick Dick] 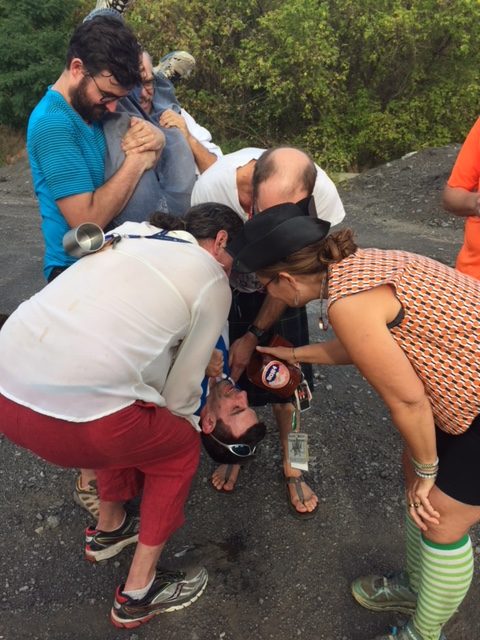